2 Colleagues Fight Over Same Man They Are Dating In Office

Two colleagues who were dating same man, were reportedly sent on suspension today after a mild drama occurred at their office over the man.

Twitter user @Jenniieey who shared the story, said one of the ladies got engaged to the man last october, but broke it off and continued the relationship with the man. Here's her tweet on the drama;

There was drama in my office dis afternoon..Serious drama dat someone's wig was flying in d air. dey both on suspension now tho. This is how it all startd. a colleague in my dept was datin dis guy for 2yrs &dey got engagd last year May bt broke it off October.

But uncle still continued the relationship ooo saying he needed more time to b ready for marriage and all,, they were knacking steady.. every time uncle Wil b coming to her office to bring lunch but for two people instead, she and another colleague in Admin.

If babe ask, uncle Wil say ah ha, r u girls not friends again.. there's nothing wrong if I bring lunch for u and Ur Friend na..so the bringer of lunch continued ooo unknown to us.. uncle was not just bringing lunch to the office ooo.

He was also serving aunty admin dinner in bed in her room.. he has been knacking aunty admin since February last year even before he got engaged.. everytime he says he's traveling, he was actually traveling to aunty admins house.

So after he called off the engagement in October, his babe cried and guess what.. aunty admin was there for her all through. Telling her to forget the guy and that she sud b grateful that he should his true character before she said "I Do" to him.

So fast forward to today na, the babe in my department heard her friend (aunty admin) got engaged last night, she rushed to admin department to see ring and congratulate her.. next thing she was shocked to see the ring looked similar to wat uncle have her.

She kept looking at the ring but she was sure it was the same ring.. so babe decided to steal aunty admin phone to verify since she knows the password..besides everyone was just congratulating her and no one was paying attention to babe in my dept.

Long story short ooo.. that was how the babe in my department saw engagement photos they took and it was with her man.. she just threw the phone on the floor and dived aunty admin ..na there wrestling start ooo..wig flying in d air, slaps , bite.. evrytin.

They beat themselves till HR came and asked both of them to leave the building ooo.. then sent them suspension letter.. I actually rushed to admin to see for my self.. it was really sad.. now the whole Office knows everything.. Chai.. I'm sure d guy knows too. 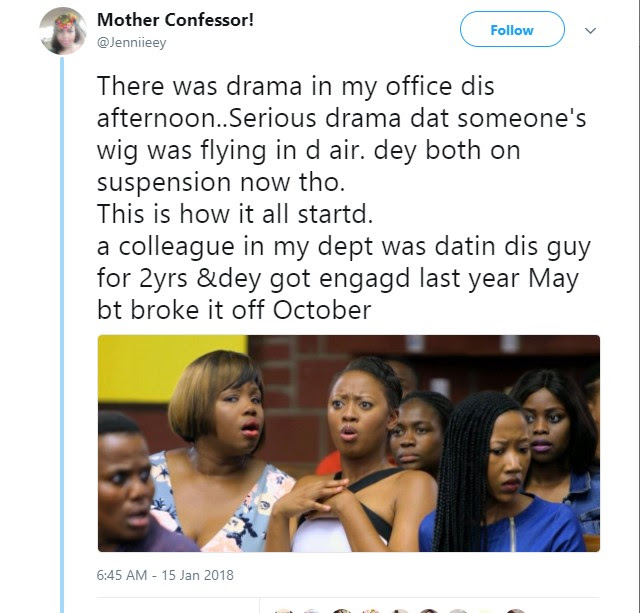 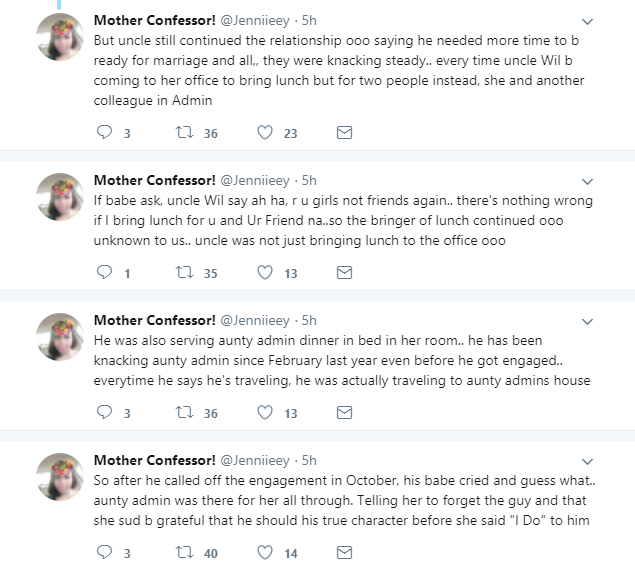 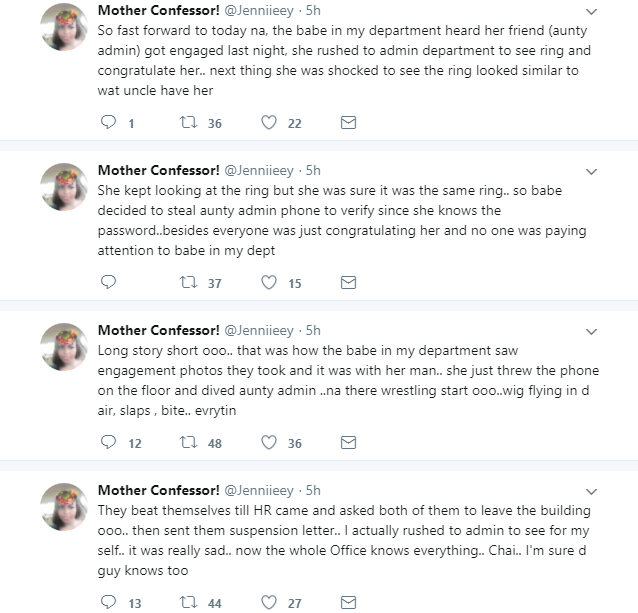