Home » exclusive » Corruption Must Be Fought Like Jihad – Mag

The Acting Chairman of the Economic and Financial Crimes Commission, EFCC, Ibrahim Magu, has said that corruption must be fought like a jihad.

The EFCC boss also said that the corrupt were claiming that they were being prosecuted because of their ethnic identity or the region they came from.

Magu said Nigerians must not leave the fight against corruption for President Muhammad Buhari and Prof. Yemi Osinbajo alone, adding that the menace would have killed Nigeria by now if not checked.

The EFCC Chairman said this on Sunday in a lecture he delivered at the 7th convocation and 10th anniversary of the Fountain University, Osogbo in Osun State.

Magu, whose lecture was delivered by his Chief of Staff, Mr. Olanipekun Olukoyede, said just 55 persons stole N1.3 tn between 2006 and 2013.

This amount, Magu said, could fund massive infrastructural development in many sectors and could train almost 4,000 children from primary school to university with a budget of N25m for each of them.

He said, “This was why I said we owe it to ourselves, it is a jihad for all of us to wage the war against corruption. It is unpatriotic and a shirking of our responsibilities as citizens to fold our arms and leave the fight against corruption to President (Muhammadu ) Buhari, Vice – President (Yemi ) Osinbajo, the EFCC and a handful of others. We are all stakeholders in the fight against economic and financial crimes ; together we can defeat this evil.

“Indeed , corruption could have killed Nigeria if the rate at which corruption was festering then had not been checked. Take for instance, the money stolen by just 55 people between 2006 and 2013 is well over N1 .3 tn . One third of this money, using the World Bank rates and cost could have comfortably been used to construct 635.15 km of roads; built 183 schools ; educate 3 ,974 children from primary to tertiary education levels at N25 .24m per child; built 20, 062 units of 2 -bedroomed houses across the country and do even more.

“The cost of this grand theft therefore is that, these roads, schools and houses will never be built and these children will never have access to quality education because a few rapacious individuals had cornered for themselves what would have helped secure the lives of future generations, depriving them of quality education and healthcare, among others.

“But the corrupt, using sponsored people, claim that they are being prosecuted because of the region they came from , the religion they profess, or their ethnic identity. They do their utmost not to answer the all- important question of whether or not they are guilty of the corruption allegations against them.”

Magu stated that the EFCC had recovered N738bn in about two years due to the support of the President. 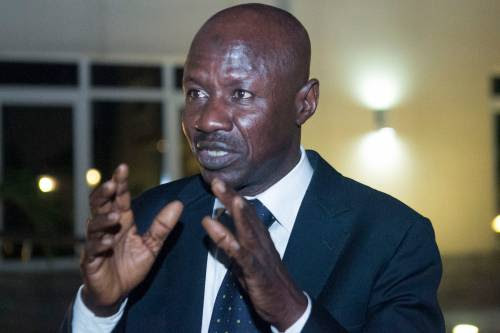