The Chairman, United Bank for Africa (UBA) Plc, and Founder, Tony Elumelu Foundation (TEF), Mr. Tony Elumelu, has stressed the need for global organisations and multinational institutions to support the much-needed growth in the African continent; adding that ultimately, such growth will affect the world positively.

Elumelu, who pointed this out on the side-lines of the 2018 World Economic Forum currently ongoing in Davos, Switzerland, said organisations must come together to provide solutions to key challenges negatively impacting African economies, especially with regards to power supply and infrastructural challenges which are the major issues that the economies have had to grapple with.

Speaking specifically about the challenge of power supply on the continent, he said, “Under the Obama administration the Power Plan programme was initiated, which helped in a number of ways. However, now, we have a number of investors, like the Transcorp Power Plc, that is working hard to improve power in the continent in the 21stcentury. The truth is we have a new crop of investors who know and realise that it is important to have access to power to grow the continent, and our governments have keyed into this.

“To this end, we would also continue to need support from World Bank, AFdB, and other organisations to support with the huge capital that is needed to boost that sector. We could also do with the support of America, because if we improve access to electricity in Africa, it would help the world in a variety of ways.”

While noting that the private sector needs to get more involved, he cited the example of the achievements of the TEF over the past few years, which he said has begun to bear fruits, adding “We are beginning to see signs of the great things that these people are doing and they are making us proud. We have helped them realise their dreams and they are doing well.”

He seized the opportunity to commend organisations that have keyed into the TEF’s vision of empowering 10,000 African youths such as the International Red Cross Society, which according to him, has helped to create more opportunities for more Africans to benefit from the TEF’s entrepreneurship programmes.

He said: “We have seen that our interventions of 1,000 beneficiaries every year cannot be enough, in the first year, for instance, we had about 20,000 applications, we selected only 1,000; by the second year, it rose to 40,000 where another 1,000 was selected; last year, which was the third, we had 98,000 and we again selected 1000. It has become imperative to create more opportunities and to engage with our friends and partners and those who love Africa and who believe in this form of development that is truly sustainable.

“So we reached out and I am happy that Red Cross came through and they have committed $1m, so now, we would not just be talking about 1,000 entrepreneurs, but now, it would be 1,200 entrepreneurs. Thanks to Red Cross for the additional 200.”

He explained that the additional $1m fund they are bringing to the table is for the Niger-Delta region, covering the Ogoni part, and the North-Eastern region where we have the Boko Haram insurgence. “This kind of intervention, is what we need to develop Africa.

We want to help to support the African youth, to support and prioritise them at a forum like this for global leaders. To let them know that Africa needs a new form of support, not necessarily hand-outs but support hat can empower. We need people to team up with us to support these youth,” he passionately added. 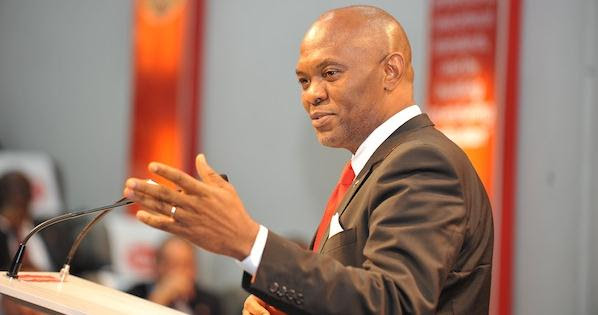