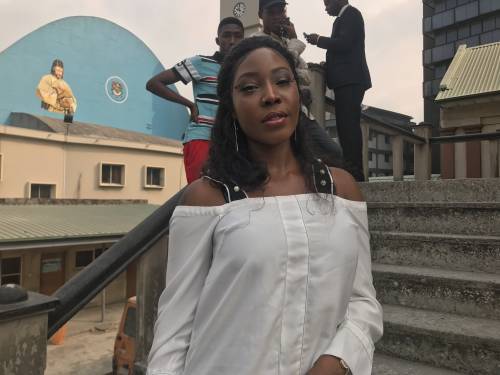 Stephanie Otobo was in the news last year after claiming the Senior Pastor of Omega Fire Ministries, Apostle Johnson Suleiman, and herself were in a sexual relationship. This scandal rocked the man of God, who although denied every connection with the Canadian-based singer.
Just yesterday, the lady was at his church in Edo state and in front of his congregation, confessed that she lied against him. According to Stephanie, she was paid heavily by some politicians to tarnish the image of the pastor.
She thereafter sought for forgiveness from the pastor and his wife, Lizzy. which they did wholeheartedly. Mrs Suleman later prayed for her and said she has forgiven her.
The sex scandal, which was one of the stories that trended in the year 2017, saw the Pastor defending himself and denying all the allegations against him. He said the lady was being used by some agents that were bent on bringing him and his ministry down.
Recall that before the sex scandal issue erupted, Apostle Suleiman had been invited by the Nigerian government for a statement he allegedly made regarding Fulani herdsmen. The pastor had ordered his church members to kill and maim any herdsmen they see around his church.
This statement, according to the Department of State security, posed a national security threat and the pastor was called to explain himself at their office.
In the latter part of the year, Apostle Suleiman sued Stephanie Otobo. The cleric was seeking N1bn damages for the alleged defamation of his character by Otobo.
Earlier this year, Stephanie Otobo was made to appear at the Tinubu Magistrate court in Lagos, where a suit filed against her was handed off by Magistrate Kikelomo Bukola Ayeye.
According to SaharaReporters, the presiding magistrate on Tuesday, January 23, 2018, said she would be returning the case file for reassignment, adding that her action was guided by a directive she received through a letter from office of Deputy Chief Registrar.
Watch the video below:
Tweet