Sanusi’s claim that 800 Fulani were killed, a lie – Taraba govt, CAN

The Taraba State Government and the Christian Association of Nigeria chapter in the state on Tuesday described as outright false the claim by the Emir of Kano, Muhammadu Sanusi II, that over 800 Fulani people were killed in the state last year.

Sanusi had in an interview with the Sunday Punch alleged that on one weekend, 800 Fulani were killed on the Mambilla Plateau in Taraba State.

“I personally handed over to the Federal Government a dossier with the names and pictures of 800 Fulani people slaughtered in Taraba as well as names of persons known to have participated in the act of ethnic cleansing but nothing has been done,” Sanusi had alleged.

But the state government, through the Commissioner for Justice and the Attorney General of the state, Yusufu Akirikwen, denied Sanusi’s claim, describing it as ill-intended.

According to him the state government was able to contain the crisis within a record time and a commission of inquiry was constituted immediately to look into the cause of the crisis.

He added that the committee had submitted its report and that government had constituted a white paper drafting committee which will soon make the findings and recommendations of the report public.

“We received memoranda from individuals and groups during the committee’s public hearing and nobody came out with that figure. How come Sanusi arrived at his figure of 800 people killed in the clash that lasted for less than three days?

“So, I challenge Sanusi to tell Nigerians where he got his figure from. Did he come down to Mambilla to conduct the headcount of the dead people?

“Where did he get his figure of 800 from and the names and pictures of only Fulani people killed in the crisis? Has he done that before now?

“We have another crisis in Lau, let him also come down and conduct his research to prove to Nigerians that he is not being unnecessarily bias in his false accusation against the Taraba State Government,” he said.

The Attorney General urged leaders to always guard their utterances and not descend so low in making false claims capable of threatening the unity of the country.

Also, the state CAN in a press statement issued in Jalingo on Tuesday and signed by its chairman, Dr. Ben Ubeh, debunked Sanusi’s claim and urged him to stop fuelling false propaganda and whipping up sentiments in favour of his kinsmen “who are in actual sense, killing people on a daily basis in some parts of the country.”

“The records are there in most of the national dailies that reported the communal clash on the Mambilla last year. NGOs, UNCHR and other international organisations visited the Mambilla in the wake of that crisis, but in all of these the highest number of death recorded from both sides was 18.

“How is it possible to manipulate the figures and force all the different agencies to report 18 casualty figure. Obviously, the 800 Fulani people that were slaughtered according to Sanusi only existed in his imagination,” the statement said.

While calling on the Federal Government to drop the idea of cattle colonies, CAN urged the government to assist herdsmen to build private ranches.

The Christian organisation also urged the Federal Government to look into the plight of the over 10,000 internally displaced persons currently in camps as a result of herdsmen’s attacks in the state. 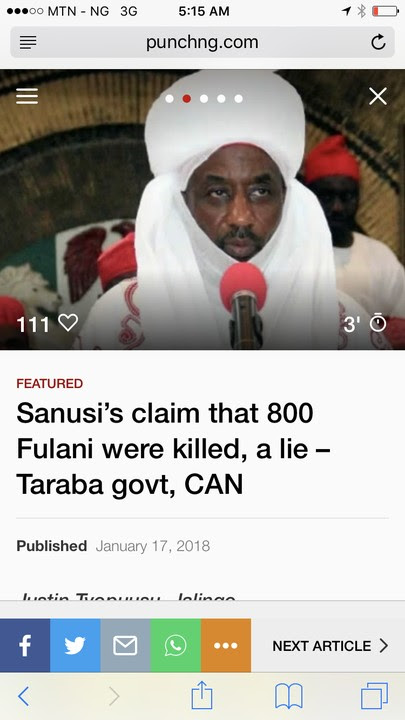