Home » lifestyle » This Is The Reason Men Propose On One Bent Knee.

This Is The Reason Men Propose On One Bent Knee.

There is no more immediately recognizable romantic gesture than when a man proposes marriage down on one bent knee. This custom has been around for centuries and remains popular today.

History Behind Proposing on a Bended Knee.

There is no clear historical origin of the idea of proposing on a bent knee, but the gesture bears striking resemblance to many other ceremonial situations, including:

Religion: Kneeling is appropriate during prayers and other religious ceremonies. Kneeling is also done to genuflect when entering a church or temple. When proposing, kneeling can have the same spiritual connotation and can be seen as a sign of respect.

Royalty: Knights kneel while being awarded honors from kings and queens. This can hold true for a proposal of marriage and can be seen as an honor.

Surrender: Bowing in supplication before a victorious enemy is typically seen as a gesture of surrender. When proposing, a couple commits to one another and surrenders oneself to being part of a couple.

Regardless of the origin, the idea of asking for a loved one's hand in marriage while partially kneeling is a highly symbolic gesture embodying the very essence of committing one's life to another.
The practical reason behind a bent knee proposal is that it puts the engagement ring in an elevated position between the couple, letting the light hit it clearly without being blocked by both individuals. This highlights the glitter of the ring as well as emphasizing the strength of the commitment. 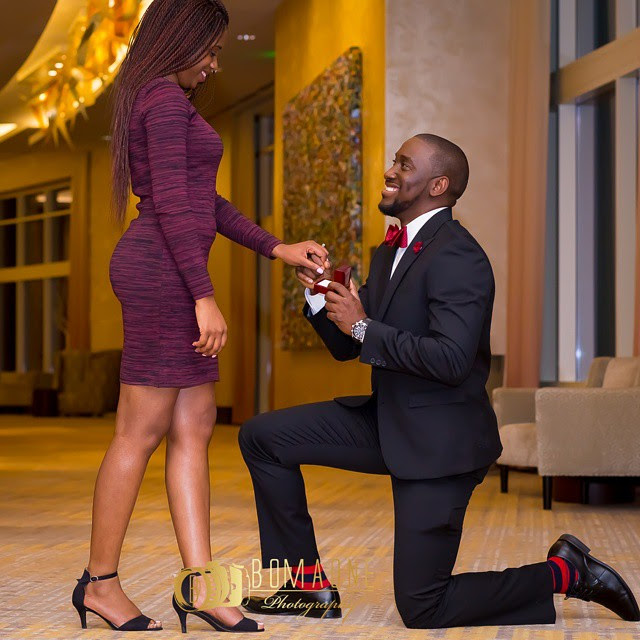