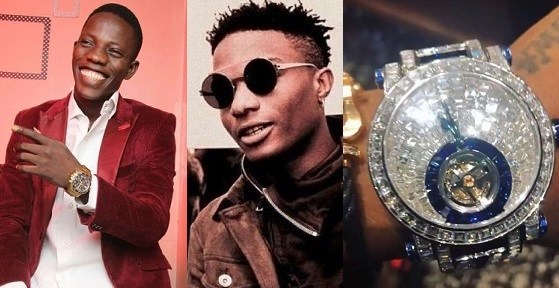 Starboy, Wizkid yesterday, broke the internet, after he showed off a $1.2 million diamond encrusted wristwatch.

Though he didn’t indicate if he actually purchased the multi-million naira watch, but folks are assuming he did.. Like why can’t he? He’s rich AF!

We heard him saying in the video!

Wizkid should have used the “over 400 million” to elevate about 400 unemployed Nigerians from poverty… By giving them 1 million naira each.

He wrote; “Wizkid you for don use the N400m you used for wrist watch to help 400 unemployed youths startup real biz. 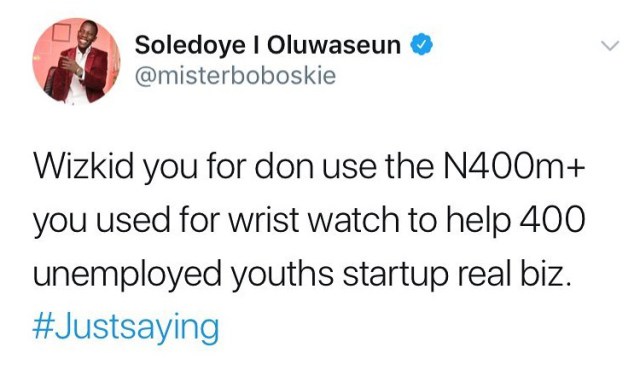 Bring out only 20k nd bless some homeless or hungry people too.Be waiting for someone’s 400+ million naira😂,baba calculate am to naira🤣.”

fullstackmafia: “The 400 youths are mad… don’t go and help yourselves… wait there”

uju_edinbus: “Is it ur money! So after singing up and down. Jumping on stage like a monkey, he cannot buy himself whatever he wants abi? Don’t ever tell my wizkid wat to do with his money again!”

klotemple: “U did not ask ur Gucci shoe loving president and power bike collector president s son for empowerment instead of Gucci and Kawasaki it’s honest working men u are trolling . May the god of work empower u to demonstrate and vote in 2019.”

dqnadiya: “So what u mean is, what he works so hard for should not go on him because it’s too expensive ohh but he shld give to others to prove himself yeah!

We are just pathetic nowadays!!! #onhisownsweat tsiupssss. Like he doesn’t help pple in other ways🙄🙄”