Woman, 33, watching 50 Shades of Grey arrested for m@sturbat1ng at cinema

That's one way to wind up in cuffs! Woman, 33, watching 50 Shades of Grey arrested for m@sturbat1ng at movie theater in Mexico during S&M-filled drama

A woman, 33, watching 50 Shades of Grey at a movie theater in Sinaloa, Mexico got taken out in handcuffs

A woman watching 50 Shades of Grey at a movie theater in Mexico got taken out in handcuffs - and not because she went with a Christian Grey impersonator.

The unmarried 33-year-old had managed to secure herself a prime seat in the twelfth row of the theater to watch the blockbuster.

The woman had gone to see the film two days after its release on Valentine's Day, La Verdad reported.

Police arrived at the cinema and arrested the woman for public indecency. 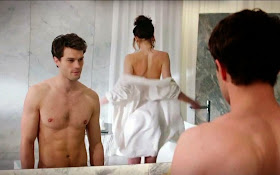 Handcuffs were snapped on her wrists and she was removed from the premises.

Although the woman might disagree, the film has received mixed reviews from critics.

Based on the best-selling novel by E.L. James, the movie stars Dakota Johnson and Jamie Dornan.

in the film, which is known for its S&M content, student Anastasia Steele's (Johnson) life changes when she meets handsome billionaire Christian Grey (Dorman) and they begin a relationship.

The film, which dominated at the box office last weekend with $81.7million in ticket sales, grossed $23.2 million this weekend, USA TODAY reported.

'It's an unqualified, out-and-out success.

'This movie was a sprinter out of the gate, posting the biggest opening weekend ever for February and become a worldwide phenomenon the minute it was released.'