Home » politics » Nigeria Will Regret Having Youth As President — Sagay

Nigeria Will Regret Having Youth As President — Sagay

Posted by Admin Posted on February 13, 2018 with No comments

Prof. Itse Sagay (SAN), Chairman of the Presidential Advisory Committee Against Corruption (PACAC) on Monday said Nigeria would be embarking on a dangerous journey if it elected a youth as president.

In a chat with DAILY INDEPENDENT, on Monday, Sagay said there was no evidence that youths were better than elders in leadership.

He argued that anyone thinking youths would perform better in positions of authority in Nigeria was shallow-minded.

While urging the youths to come out and fight for power, he argued that power was not served a la carte, adding that the older generations would not willingly hand over power to youths on a platter of gold unless the younger generations worked for it.

The constitutional lawyer also lambasted proponents of the Not-Too-Young-To-Run movement, urging them to wait till they attain the constitutionally required age for contesting public office.

According to him, it is absurd seeing a 20-year-old coming to contest as senator of the Federal Republic.

“Number one: it is shallow-thinking for anyone to think that if a youth becomes president, he will do better than the older one.

“It is very shallow thinking because, as I see it, it is the youths of Nigeria today who believe in overnight wealth, who want billions overnight, who don’t want to work for their living and gradually build up their assets and business.

“That psychology of overnight wealth is almost exclusively a youth attribute.

“Number two: who is stopping the youths? All these people who are advocating that the youths should take over are in essence saying the older ones should just call the youths and say ‘come and take power’.

“If you want power, you work for it. You are not going to sit down in your sitting room and somebody will bring power to you. Let them join the fray.”

Giving instances of young leaders in the world such as Emmanuel Macron of France, Sebastian Kurz of Austria and George Weah of Liberia, Sagay said these young leaders stepped out of their comfort zones, campaigned for votes and were voted for by the electorate before assuming the mantle of leadership.

Sagay also cited the example of President Muhammadu Buhari, who succeeded after three failed attempts at the presidency.

He, however, said Nigeria may regret having a youth as president as the preponderance of evidence points to the fact that it is riskier to have a youth at the helm of affairs of Nigeria.

He, therefore, advised Nigerians to maintain the status quo, which implies allowing President Buhari to continue for another term in office.

“All these people they mentioned, like France’s President Emmanuel Macron, Sebastian Kurz of Austria, and other young leaders worked hard for it.

“They came out in the open and campaigned for votes and people voted for them.

“George Weah was tenacious in his quest until he got it. Even President Buhari succeeded in his fourth attempt.

“They will be fooling themselves if they think they can sit on their backpedal and somebody will hand over power to them. That is a pure delusion.

“Speaking generally, there is no evidence whatsoever that the youths are better.

“In fact, the preponderance of evidence is that it is riskier to have a youth, at least in this country, at the helm of affairs.

“We will regret it. So, let’s just leave things as they are. Let people come to power naturally by the political process that we know. That is the only way forward,” he said.

Speaking of the recent youth movement, ‘Not-Too-Young-To-Run’, he said: “Are they frightened that they will not live up to the constitutionally required age?

“It is very odd to hear 20-year-olds say that they want to become senators. That, to me, is preposterous.

“Why are they in a rush? They shouldn’t be in a rush as if they won’t live up the constitutionally required age.”

Sagay’s position is in sharp contrast with two former leaders, Olusegun Obasanjo and Ibrahim Babangida, who in two separate statements have urged Nigerians to elect a new breed of young leaders to manage the affairs of the nation from 2019.

In a recent statement entitled, ‘Towards a National Rebirth’, signed by Kassim Afegbua, Babangida’s Media Adviser, the former military president advised Nigerians to do away with analogue leaders and embrace those of the digital age.

On his part, Obasanjo called on President Buhari not to seek re-election in 2019 while asking Nigerians to support his Coalition for Nigerian Movement which seeks to install new breed of leaders in 2019. 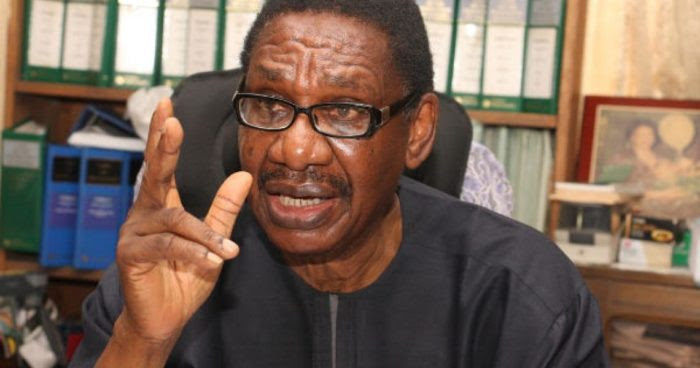