Posted by Admin Posted on February 02, 2018 with No comments

Former President Olusegun Obasanjo has berated the National Assembly and the Federal Character Commission for failing to check the excesses of President Muhammadu Buhari in the uneven distribution of public offices.

Obasanjo also said his recent open letter to President Buhari was not borne out malice or ‘bad belle’ but out of his deep concern for the situation in the country.

He said this on Thursday at the secretariat of the Nigeria Union of Journalists, Oke Ilewo area of Abeokuta, shortly after the Coalition for Nigeria Movement was inaugurated in Ogun State, and he was registered as a member of the movement.

The former President, who was flanked by a former Military Administrator of old Ondo State, Gen. Ekundayo Opaleye and a former Minister of State for Defence, Mrs. Dupe Adelaja, said the ethos of nation building through even distribution of public offices had been abused.

He said, “Let me emphasise important areas, programmes, priorities or processes for improved attention. To start with, we seem to have taken nation building for granted. Nation building must be given continued attention to give every citizen a feeling of belonging and a stake in his or her country.

“For instance, the Federal Character principle, as espoused in our constitution, was to guide the leadership to search for competent holders of major offices to be distributed within the entire nation, and avoid concentration in a few ethnic hands or geographical places, as we currently have in the leadership of our security apparatus.

“To avoid such non-integrative situation, we have the National Assembly and the Federal Character Commission, both institutions which must raise the alarm or call for correction of actions by the executive that violates the spirit of our constitution.”

Obasanjo’s registration came almost 24 hours after the CNM was inaugurated in Abuja.

Obasanjo arrived the venue at exactly 12.44pm in company with dignitaries including former governors of Cross River and Osun states, Donald Duke and Prince Olagunsoye Oyinlola.

The former President, while addressing scores of potential members who had gathered at the venue, said he was surprised that many Nigerians were worried that he exchanged pleasantries with President Buhari at the African Unity summit in Addis Ababa, capital of Ethiopia, few days after he wrote the open letter to the President.

Obasanjo said, “Last week, I issued a statement which I did not do lightly or frivolously but out of deep concern for the situation of our country.

“I wonder why some Nigerians were worried why I had to pay respect to the Nigerian President at Addis Ababa. That’s my own upbringing as a well born and bred Yoruba boy.

“That doesn’t mean that what I have said about the President, was said out of bitterness and hatred. It is evident that the President has performed, in some areas, good enough.

“In other areas not good and a proper advice was given which he may take and he may not take.

“I didn’t do that out of malice or out of ‘bad belle.’ I did it out of my respect for that office and my interest, and I hope, in your interest and the interest of Buhari in Nigeria.

“I went to him just before the beginning of the opening of the AU summit. I had gone round to greet some few other Presidents, should I ignore him? So, I went to my President, greeted him and we joked before General Abdulsalami (Abubakar) said we should have a group photograph.

“I had wanted him (Buhari) to stand in the middle before he said I am the most senior and the photograph went viral on the social media.”

Obasanjo, while justifying the need for the CNM, argued that if all the instruments the country had used in the quest for nation building and governance since independence had failed, it was imperative to try new ways.

He, however, warned that if the movement “decides to transform itself and go into partisan politics, I will cease to be a member.”

Obasanjo further said the spate of violence, and other forms of criminality had not received sufficient proactive ameliorative responses through transformational leadership.

He said the youth and women would be carried along, as “they must be part and parcel of governance in this country.”

Obasanjo, who urged Nigerians to go online and register as members, said the CNM currently had no link with other movements.

But he, however, said “if there are people of like minds, people who share the views and the aims and objectives of the Coalition for Nigeria Movement who want to join this movement, we will not object, we will welcome them.”

He said the movement did not regard itself as a third force, but “it sees itself as a popular movement that can accommodate all Nigerians irrespective of their political interest or affiliations and will propel Nigeria forward.”

Obasanjo later led the gathering to sing a chorus titled, ‘I see a new Nigeria, in the hands of God.’

Others at the event included a former deputy governor in Oyo State, Taofeek Arapaja, a two-time governorship candidate in Ogun State, Prince Gboyega Isiaka and some other politicians in the state. 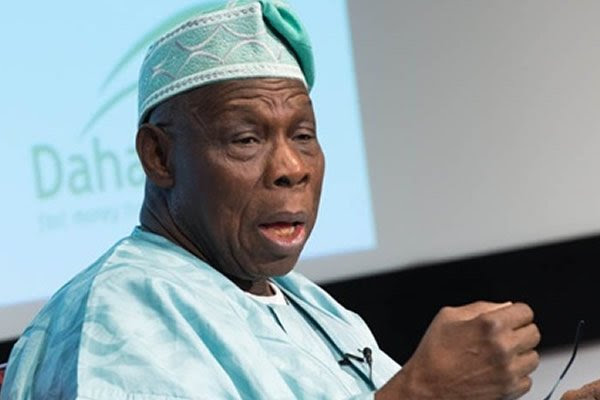