Posted by Admin Posted on February 24, 2018 with No comments

The Nigeria Police Force has said it cannot arrest herdsmen who allow their cattle to stray onto and graze on airport runways in the country.
The Commissioner of Police , Airport Command, Mustapha Dandaura, stated this in an interview with our correspondent on Friday.

He said herdsmen could only be arrested in states where the anti - open grazing law was effective .

However , Dandaura said that all policemen and other security officials at the airports had been instructed to stay on high alert to prevent a situation whereby cows would take over airport runways .

He said , “It ’ s only in states where the anti - open grazing law is in place that herdsmen can be arrested for allowing their cattle to graze on airport runways . Apart from those states , we have not been told to start arresting herdsmen .

“ But we have already alerted our men at the airports to ensure such incident does not occur again. The state police commands have also been carried along and everyone is on the alert .

“ We can ’ t have a situation whereby cows would be straying onto and grazing on airport runways because it is embarrassing . Everyone is now on the alert and it ’ s going to be prevented. ”

Last Saturday , an Air Peace flight from Lagos had been prevented from landing at the Akure Airport , Ondo State as cows took over the runway.

It had taken the efforts of airport security and other aviation workers to clear the runway before the airplane landed .

The Federal Airports Authority of Nigeria had apologised to the airline affected and suspended the head of aviation security at the airport following the bizarre incident.

A similar incident had occurred in November 2016 when a fully - loaded plane belonging to Air Peace had to abort landing at the Sam Mbakwe Airport, Owerri, Imo State when the pilot discovered that the runway had been invaded by cows .

Before the Owerri episode, an Air France plane was reported to have collided with cows at the runway of the Port Harcourt International Airport . 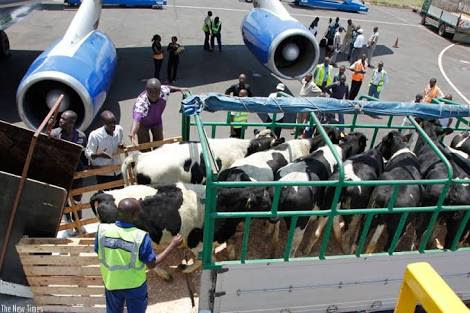