Home » politics » Dino Melaye: APC Has Borrowed More Than PDP Without Any Programme

Dino Melaye: APC Has Borrowed More Than PDP Without Any Programme

SENATOR Dino Melaye (Kogi West) has said the government of President Muhammadu Buhari has in three years borrowed more than previous governments of the Peoples Democratic Party, PDP, without any clearly defined or identified programme to point at.

The lawmaker was reacting to the refusal by the president to assent to a bill seeking the establishment of Peace Corps of Nigeria.

Mr. Buhari had rebuffed to append his assent to the bill citing unavailability of resources as his reason for his refusal as funding the organisation will be a financial burden on the federal government.

But Melaye, adopting a point of order on Wednesday during plenary at the Senate and relying on it rules, persuaded the upper legislative chamber to revisit the bill with a view to veto the President if he fails to rescind his rejection of the bill.

“The same thing happened when the Nigeria Security and Civil Defence Corps was to be established; there was also the same complaint that there was no money and all of that.

“But today, we can see the advantages of the civil defence and how they have helped in safeguarding government infrastructure.

“About $5.5bn was borrowed from euro bond; what part of it will the youths of this country benefit from?

“About $1bn is to be spent on security and how does this affect the youth of this country.

“Without fear or favour, the Peoples Democratic Party, in 16 years, borrowed N6tn and this government in three years, has borrowed N11tn but there is no specific programme that will empower the youth.

“Also, N500bn was earmarked for the social investment programme of the Federal Government, but we have not seen any impact.

“If the Peace Corps is given an opportunity to exist, thousands will be employed and this will help to fight unemployment in this country.

“We may need to write Mr. President to review his position; if not, we have the power on behalf of the Nigerian youths who voted us to veto him so that people will become the ultimate beneficiaries of this bill.

“The youth of this country must be given priority and they must be respected,” he said.

Thereafter, the Senate urged the President to review his position in withholding assent on the bill. 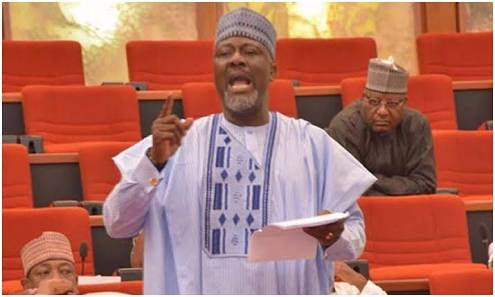