Posted by Admin Posted on April 11, 2018 with No comments
An alleged Closed Circuit Television footage of the Offa Bank Robbery in Offa, Kwara State, has surfaced on the internet.

On Thursday last week, gunmen numbering about 30 had stormed the town and engaged in a robbery operation that was reported to have lasted for about 2 hours without any confrontation from security agents across the state.

No fewer than 17 persons, including nine policemen, were killed in the robbery operation carried out

In the footage, a woman and her child were seen leaving what looked like the ATM house of a bank when gun bearing men started shooting sporadically from the major road.

Two men standing by the small house took off immediately they heard the gunshots, while the camera angle did not show what became of the woman and the child she was holding.

After that, three armed men were seen going around seemingly coordinating what next to do.

Smoke, which appeared to come from explosives were also seen after a banging noise.

Another explosive was later thrown into what seem like the small building housing the ATM.

Then the men went inside and came out.

The CCTV footage could however not be independently confirmed as being that of the Offa robbery incident as at press time.

Watch the Video below:

The Kwara State, Abdulfatah Ahmed has however offered N5 million for information that will lead to the arrest of the perpetrators of the Offa bank robbery attack in Offa town. On Thursday, police officers and residents were killed when armed robbers attacked five banks and a police station.

In a statement released by the media aide to the governor Muyideen Akorede, Gov. Ahmed has reportedly promised anyone who has useful information to contact the state police command on the following numbers – 0803 739 1280‬ and 0803 236 5122.

The Police also reported that some suspects linked to the robbery attack are already in their custody. 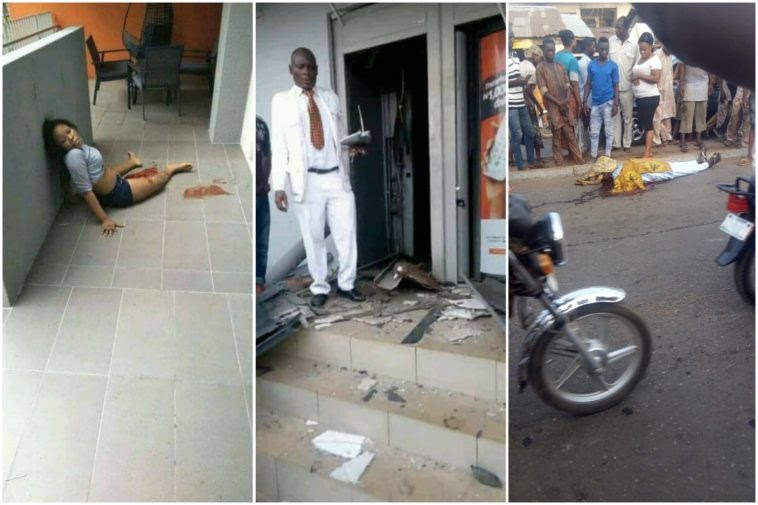