Home » Relationships » Fight At A Wedding: Groom Slept With Bridesmaid & It Was Discovered

Fight At A Wedding: Groom Slept With Bridesmaid & It Was Discovered

All hell broke loose at a wedding when it was discovered that the groom slept with one of the bridesmaids.

In a video trending online, smartly-dressed men are seen swinging and kicking at each other. One man became unconscious after he was thrown to the floor and kicked several times. But the fight continued in spite of his state.

The men took the fight to another section and broke off into groups as they fought, while a few concerned wedding guests surrounded the unconscious man. 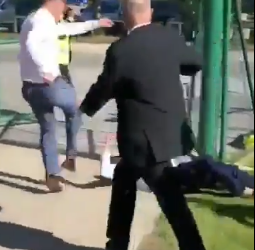