Detectives attached to the Lagos State Police Command were confused as they listened to two lovers, who met on Facebook, trade accusations. The lady, Precious, claimed that Mr. Ekene Onyetube (25) drugged, raped and stole her phones.

But Onyetube insisted that he had a consensual sex with Precious. Preferring to work on Precious’s allegation, police arrested Onyetube for allegedly drugging and raping his Facebook lover.

The police said that the incident occurred at De-Didos Hotel in Lagos on May 5. The victim was alleged to have come all the way from Enugu State, to meet Onyetube. Onyetube was alleged to have lodged the lady in a hotel, then later drugged and raped her.

It was further gathered that after raping her, he disappeared with her phones and voter’s card.

The lady slept throughout the day until the hotel management had to go to check the room. She was found sleeping deeply and when repeated attempts to wake her failed, the alarmed hotel staff rushed her to the nearest hospital.

When the lady finally came to, she went to Ilembe Hausa Police Station to lodge a complaint.

The suspect was trailed and arrested. The matter was transferred to the Police Command, Ikeja. The state Commissioner of Police, Edgal Imohimi, said that Onyetube met Precious via Facebook and got friendly with her, but the suspect insisted that he and Precious were old friends that reconnected on Facebook.

Imohimi noted: “The suspect invited the lady, who resides at Enugu State, to pay him a visit in Lagos.

She accepted. It was in the hotel where she was lodged that the incident took place. After she reported the matter, our detectives went into action and the suspect was found at another hotel.”

Precious recounted: “I just concluded my National Youth Service Corps (NYSC) programme in Enugu State. I came to Lagos for a job interview.

Before then, we had been chatting on Facebook and on HITWE. He repeatedly laid emphasis on us meeting and I finally agreed that we should meet.

He wanted me to meet him at a hotel, but I said no. Thus, we met at a hotel bar. He ordered for drinks, and while we were drinking, I went to ease myself in the toilet. I suspected that it was when I left that he added something to my drink. I started feeling dizzy after taking the drink.

I found myself in the hotel room at midnight. I was really weak; I couldn’t say anything. I was just looking at him. He made some calls and from the calls, I suspected he was a ‘yahoo yahoo boy.’ He made away with my bags, two of my phones and my voter’s card.”

Onyetube, however, said: “We were old friends, who had lost contacts, but luckily, we met on social media and exchanged phone numbers. I never invited her to Lagos, she came on her own.

When she came to Lagos, she called me that she would like to see me. She said that she needed transport to go back to Enugu. We lodged in a hotel for two days. We were going in and out of the hotel together to enjoy ourselves.

After the two days, I left her with N5,000. I left because I had a work to attend to; I’m into solar energy installation. I didn’t know the N5,000 wasn’t enough.

She went to those places we had been to like the hotels, city points, and others to lodge complaints that I stole her phone and raped her which I didn’t.”

Imohimi warned youngsters to be wary of those who promise them gifts and better life, especially on the social media. The police boss said that the youth should seek the advice of their parents at all times about people making promises to them. 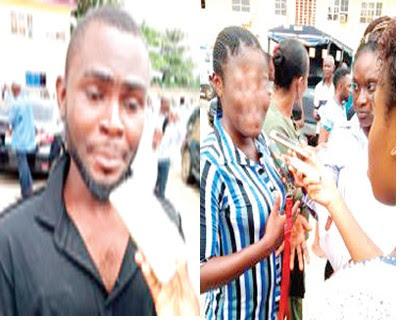