Arsenal star Pierre Emerick Aubameyang has proudly rocked the Super Eagles jersey after previously stating that he will support the Super Eagles at the 2018 FIFA World Cup. The former Borussia Dortmund star appreciated Nike for giving him the colorful jersey ahead of Super Eagles' match against Croatia on Saturday.

He shared a picture of himself rocking the jersey as he posed with a private jet. He captioned it; I said that I wanted a naija @nikefootball kit and today they brought it to me thanks a lot now I can support

The Super Eagles kits for the World Cup released by international sport wear giants Nike has generated a lot of reactions worldwide, topping the rankings of jerseys of countries going to the tournament.

Aubameyang is teammates at Arsenal with Super Eagles midfielder Alex Iwobi and is the latest to be blown away by the design of the kits.

Ina message on his official Twitter handle Aubameyang revealed he will be supporting the Super Eagles at the tournament.

He added two reasons for supporting the Eagles, first, he said for his teammate Iwobi and the other for the amazing kits.

His tweet read, “I support Nigeria for World Cup because of my friend @alexiwobi but to tell the truth also because of your @nikefootball kit need one !!!” 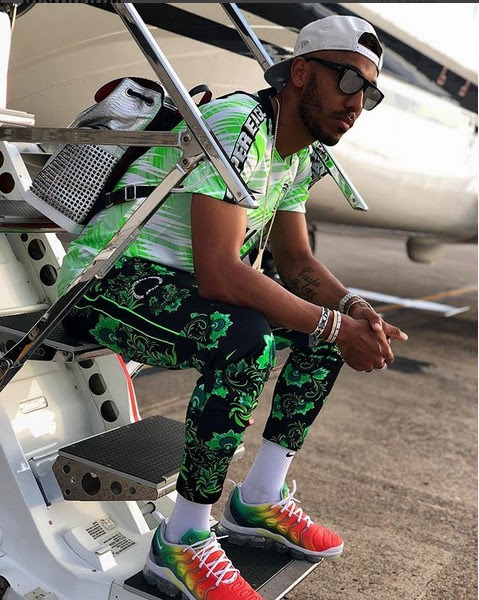