Posted by Admin Posted on October 06, 2018 with No comments

The young lady shared her story on break_or_makeup where she revealed her sad ordeal. According to her, she has just found out that her sister has been having s*x with her boyfriend.
She found out after her sister confessed to her.

The baffling part is that, her siser has even had up to 5 abortions for the man.
Below is how she put the story:
My boyfriend has been sleeping with my younger sister and she just confessed to me yesterday. I don't know how to handle it because I have not confronted him yet. Still thinking what to do.

The most painful part is that my kid sister said she had aborted 5 pregnancies for him, and I have aborted 3.
I feel so stupid, used and abused. It's like stupidity runs in our blood. Was it his dick or his money or his sweet mouth that made us this foolish? Because even my sister said she does not know how she got involved with him.

What is the best punishment for this man? Should I cut off his manhood? Make him go mad or.. 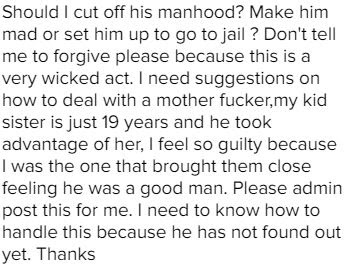