Posted by Admin Posted on January 02, 2019 with No comments

Premier League giant, Chelsea FC has made its first signing in the January transfer window which has just opened as it signs Pulisic from Borussia Dortmund. 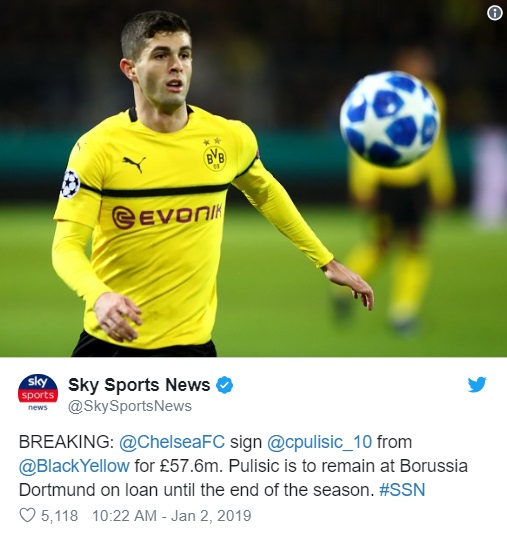 Chelsea have signed Borussia Dortmund forward, Christian Pulisic for 64m Euros (£58m), but will loan him back to the German club until the end of the season.
The 20-year-old United States international, who was linked with Liverpool and Arsenal, joined Dortmund as a youth player in 2015.
Pulisic has scored nine goals in 23 games for the US.
"It's a privilege to have signed for such a legendary club," he said.
Dortmund director Michael Zorc said: "It was always Christian's dream to play in the Premier League.

"That certainly has to do with his American background, and as a result we were unable to extend his contract.

"Against this background, we have decided to accept an extremely lucrative bid by Chelsea, given the low contract maturity."
Pulisic's contract at Dortmund was due to expire in June 2020.
He made his Bundesliga debut, aged 17, in January 2016, and two months later won his first USA cap.
Pulisic has made 81 appearances in the German top flight and played 20 games in the Champions League.
He has scored three goals in 18 appearances in all competitions for Dortmund this season.
Chelsea director, Marina Granovskaia described Pulisic as "one of Europe's most sought-after young players".

"At just 20, we believe he has the potential to become an important Chelsea player for many years to come," she said.
Pulisic is the first major Premier League signing since the transfer window opened on 1 January.
Tweet